17 days ago by MWCM Admin 0 Comments 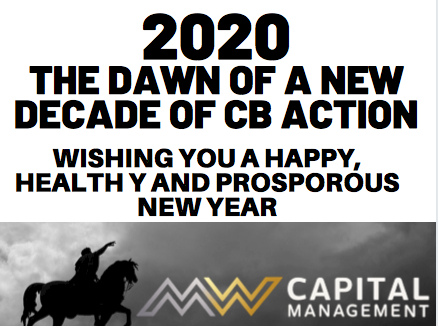 20/20 vision of future market action would be nice to have, but unfortunately like other investors, we must use judgement and analysis to have a sense of the market’s future direction. Our outlook on the markets and the various asset classes has changed over the course of the last few months.

Back in September/October we were increasingly taking the view that it made sense to be defensively positioned – economic data was weakening and the trade war was heating up. We considered adding duration to bond exposure, but ultimately took a ‘wait and see’ attitude. Bond yields were already so low and on the short term there was room for yields to increase.

Our concern that yields would increase was vindicated in the 4th quarter, driven by three events: 1) the Fed indicated very clearly in their October meeting that they wouldn’t be raising rates until inflation was well above target of 2%; 2) the Repo market broke and the Fed stepped in aggressively to keep overnight rates manageable and 3) there was talk of increasing fiscal spend in many economies.

So, going forward, how has this impacted our view of the Equity, Bond and Precious Metals markets?

In the short-term, we take the view that the continued Central Bank and Government largesse will be supportive of risk assets such as equities and that the risk of an economic recession is lower today than it was a quarter back. Inflation remains low and the goldilocks period, I hate to say it, seems likely to have been extended. The long-end of the curve is still well behaved and the cost of capital is low. Risk assets should continue to do well in such an environment.

Bonds though, are likely to languish as the improved economic data, at least on the short term, will be supportive of yields. So, we don’t plan to add to the current allocations. If anything, we may cut back a little on the short-term, expecting bond yields may be pushed slightly higher.

The actions though, of the Fed and other central banks and the potential of higher fiscal spending has though, given support to our positive view on Precious Metals. The Fed has told us, is that the value of the USD is under threat as they will be slow to raise rates if inflation picks up – so we will continue marginally adding as and when we consider it prudent. We continue to have a preference for Silver, as the metal is trading at a relative discount to Gold on a historical basis, a gap we feel will narrow over time.

While we see Central Bank and government largesse as being supportive to risk assets, such as equities, on the short term, we remain cautious further out – for two reasons:

Secondly, our intermediate and longer-term view remains unchanged, namely that we will see a weaker economy and weakness in risk assets, regardless of Central bank action.

Indeed, recent CB action is far from being a panacea. It has rather just further entrapped the Fed into a policy of easy money and higher inflation on the longer-term. Potentially, much higher inflation a decade or two out.

Global debt is also already at record levels and continues to increase. Increased fiscal spend and government and corporate borrowing are pushing these levels ever higher and, when the dam does eventually break, managing the ‘water fall’ sell-off will be all but impossible. At least without extreme measures. And that, I believe, is what the central banks are now prepared to do – to lower rates to negative and be the buyer of last resort. Do whatever it takes to keep the system afloat – but this won’t necessarily equate directly into a stronger economy or higher equity prices..

Thus, while our Macro Outlook is that we expect continued short-term modest economic ‘strength’, or recovery, we do expect an eventual slowdown later in the year or next, which will likely be offset by aggressive central bank and fiscal response.

Should this come about we expect we could easily see the Fed rates at parity with counterparts in Europe at around 0%, if not marginally negative.  They will, as done in the past, also be large buyers of bonds to keep yields low across the curve.  Longer-term we would expect policies such as MMT and also for real yields to remain in negative territory.

In terms of our outlook for the asset Classes:

On the medium and longer-term though, we see bonds providing an excellent hedge and potentially strong returns, should the economy eventually weaken.

We see Precious Metals increasingly as a core essential holding, in a world where the value of fiat currency is being destroyed by central banks.

2019 was an excellent year for us – we strive to continue generating strong returns for our clients, but with a very keen focus on the potential risks in the market. As always, we appreciate your support and will be doing our very best for you in 2020.