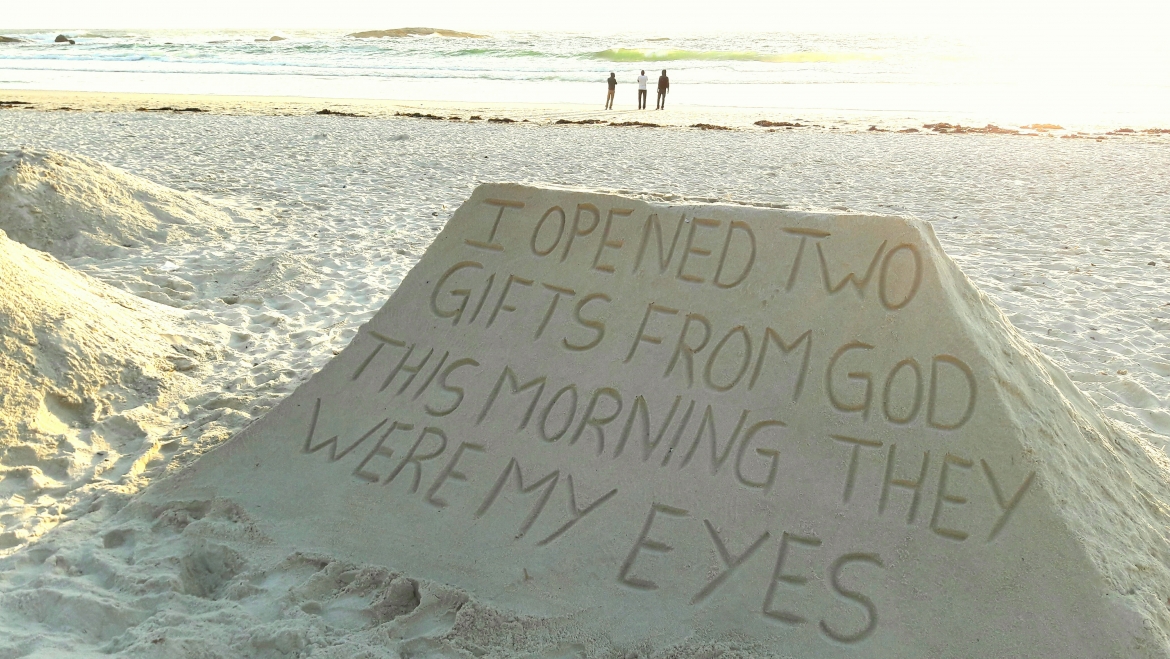 Outperforming in a difficult market

Our fund exposures have generally worked well in our Alternative Strategies account, which was up 0.75% for the month of June and 1.84% Year to Date (YTD). As at 13thJuly, it was up 2.4%. As such, it has outperformed the Balanced Asset index (SPBXCI) which was up 0.22% for June and 0.42% YTD. The account has also outperformed the HFRX Global Hedge Fund Index, which was down 0.11% YTD, as well as the HFRI Fund of Funds composite, which was up 1.15% YTD. By comparison, the MSCI AC World Equities index (ACWI) was down 0.13% YTD. The USA, which is c.52% of this index, was the outlier showing a strong performance of +2.9% for the 6 months ending 29thJune 2018.

Year to date, the largest contributor was a fixed income arbitrage manager, up 18% for the first half of the year. We took exposure to this manager with clear insights into his bets on FX, interest rates and bond markets. While the fund’s long bet on Italian sovereign yields detracted, at current level on the Italian 10yr of 2.7%, it seems a reasonable bet to make given the EU 10yr rate is -0.4% (see chart). 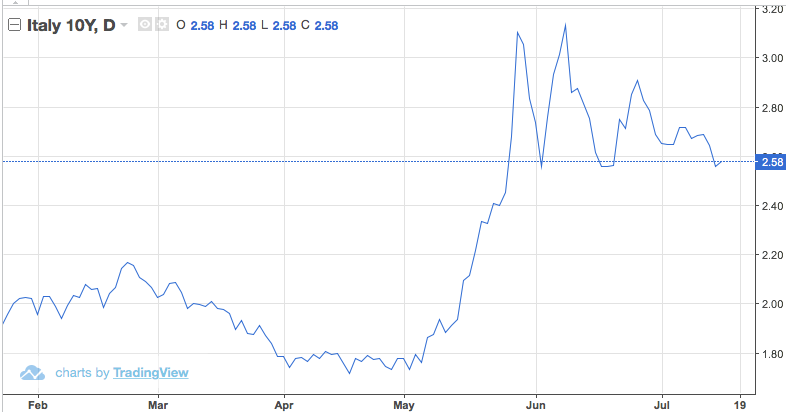 Our hedged equity and much of the Fixed Income exposure also worked reasonably. It has though been a tricky market for many strategies and managers in general with many well-known equity long/short and fixed income managers struggling. By way of example, the PIMCO Income Fund is down 16bps over the period YTD, while several Equity Hedge managers have also struggled to perform, as their short positions have worked against them. Looking at the chart below, it is clear that the most unloved stocks, often those with a high proportion of short interest, have enjoyed the greatest strength. Value on the other hand has detracted. 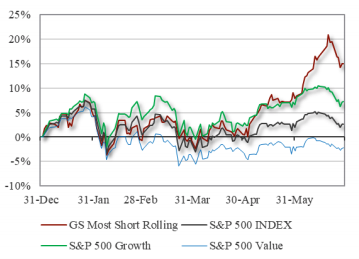 The largest detractor for us over the month, was an emerging market fixed income fund. It had a difficult first half, with long exposure to Argentina going against them. Our allocation to EM FI though is only 5% in our Alternatives strategy account and it is not a space we look to add to for the moment. Indeed, as we highlight later, we are marginally bearish on EM debt and Equity markets at this time, preferring to stick with developed markets notably the US, parts of Asia and Japan.

We continue to spend significant amount of our time reviewing the markets from a bottom up and top down perspective and use several proprietary screening tools and models. While we have found some interesting stock specific names that offer value, we generally worry that this market is close to a top. The valuation metrics justify this view.

The technicals offer similar tell-tale signs, with the breadth of the market becoming increasingly narrow.

The macro outlook is still reasonable but we are seeing signs of weakness in the emerging markets. Money is still ‘easy’ but central banks are either now tightening on the margin (US), or are starting to talk about it (EU and Japan).

This is not to say there may not be a last market ‘hurrah’, but we are increasingly looking to de-risk clients where we can.

Equity investors, particularly those focused on the US and technology, have enjoyed significant gains in the last few years. However, valuations simply don’t justify holding significant exposure at this juncture. We would also prefer to increase allocations to the Energy sector, given its relative under-performance, and rising oil prices over the past few months.

We would always advocate cutting back towards market tops rather than trying to eke out the last few percent gains. While we still like a number of names in the Technology space, we are finding a few interesting names in the Energy space and it is an area we can at least find some reasonable value. Direct equity exposure though should, in our view, be very selective and one should look for a reasonable ‘margin of safety’. Our preferred alternative to direct equity exposure, is to allocate to good long/short equity managers that have a proven track record of controlling risk and drawdowns.

Many of our market views have worked out, coming into the year expecting a stronger dollar, emerging markets to come under pressure and greater volatility (see our prior pieces on the topic earlier in the year).

The USD has strengthened around 2.7% against a basket of currencies, since the start of the year. It is up 2.7% and 2% against the EURO and the GBP respectively. Both of which we believe will be lower on the longer term, given the frailties in Europe, such as Italy’s new government threatening to leave the EU and denominate its debt in Lira.

Like others before it (Greece), Italy is not capable of paying its debt load off – at 130%, the level of austerity would be severe and long, if that was even a feasible route. More than likely, there needs to be some form of debt forgiveness or the debt needs to be re-denominated into Lira, the level of which the government can ‘adjust’. We see a weaker EURO before this is all over.

The stronger USD will also have implications for many dollar borrowers particularly those in the emerging markets that have USD debt. While the players may have changed from the last Asian debt crisis in 1997, we can see stresses in the system. We are watching Turkey with some interest.  10YR Local Government bonds there, are now trading at over 17% (see chart), while the USD denominated 10yr government debt trades at 7%. 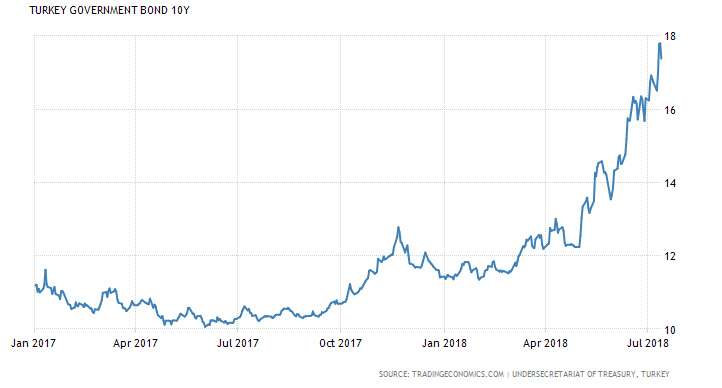 Our expectation that Emerging Markets were going to be weak was in part driven by our expectations of a higher USD. We are also underweight EM equities, for two reasons – 1) we see better value elsewhere in certain developed markets such as Japan and 2) should a sell off happen, EMs are usually the worst hit as investors look to protect capital and reduce risk. Of note is that the Emerging market index ETF (EEM) is now down close to 10% YTD, while the Shanghai Composite is down around 20%. 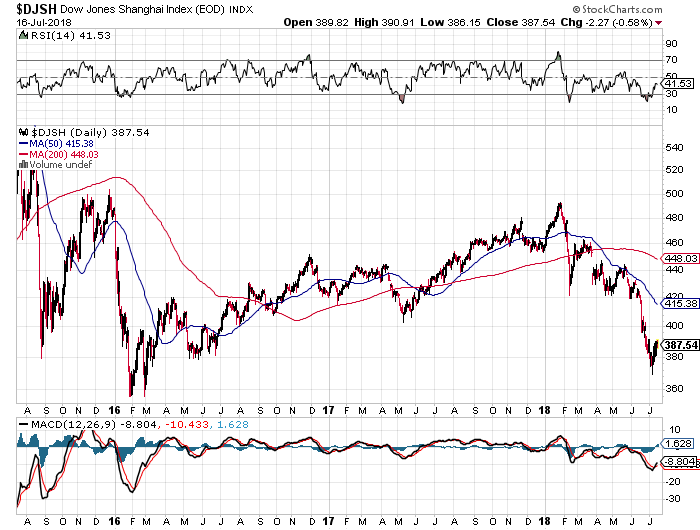 The potential for a Trade war between US and China will also hurt the emerging markets. Both sides probably know that the tit-for-tat retaliation can be damaging for themselves in  the short term. While the US needs to reign in its trade deficit in the longer term, tariffs are perhaps the least preferred way of doing so. The Chinese RMB has already weakened and may be used by policy makers as a way of offsetting some of the tariff impacts. 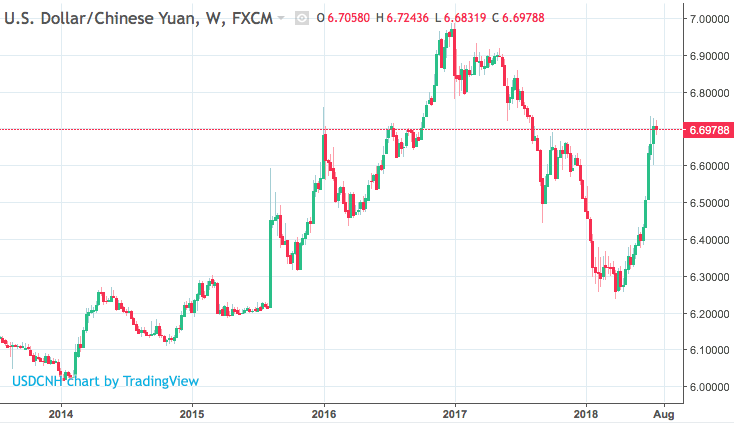 We do expect a weaker RMB as the Chinese central bank is likely to continue to provide liquidity and roll over much of the debt which is held by State-Owned Enterprises. A weaker China will result in a weaker Asia.

Overall, we remain cautious on Fixed Income and Equities. Within the wider asset classes, we do like fixed income arbitrage, short duration debt and floating rate senior secured debt and alternatives such long/short hedge equity managers (with a bias toward Asia and Japan).

For those that are orientated to having exposure to equities and can tolerate higher volatility, we can still find a number of stock longs but would advocate paring down the risk a little. Stock picking is key for us and we have had good success in identifying a few strong performers since the start of the year. These tend to be more sold down names which offer distinctive value and a catalyst to release it. While not sector orientated, we have found several good longs in the Healthcare space, Consumer Discretionary, Technology and Energy sectors. For more details, please reach out to us in person.

Readers should note that August and September are the two worst months for equity performance historically, based on the SP500 for the last 60 years, therefore, a good review of one’s equity exposures in July could be highly advantageous.

This post is intended only for accredited or institutional readers, as defined by .The information presented herein is considered reliable at the present time, however, we do not represent that it is accurate or complete, or that it should be relied upon as such. Performance data is based on bank reports and is dependent on fund filings and bank reporting. As such they should be seen as estimates and regarded for information purposes only and should not be relied upon. Speculation or stated beliefs about future events, such as market and economic conditions, company or security performance or other projections represent the beliefs of the authors and do not necessarily represent the views of MW Capital Management PteLtd. Nothing in this document should be perceived in any way as a recommendation or offer to buy or sell any security or fund. Any individual securities or funds mentioned are simply an example of areas we are currently invested in and will not be suitable for all investors. Any views and current investments may and will change over time and should not be relied on in any way.This document is not an offer to sell nor is it the solicitation of an offer to purchase any services offered, or any fund managed or recommended, by MW Capital Management PteLtd. In no way should this post be considered as being approved by any regulator or regulating authority. Investment in hedge Funds can involve total loss of principle and are meant for sophisticated investors who understand and can afford the total loss of their investment. Many hedge Funds use leverage which can exacerbate losses. Past performance is not indicative of future returns. It is intended only for accredited investors, domiciled in countries in which collective investment schemes are permitted for public distribution, offering and sale under the applicable local legislation. General business, market, economic and political conditions could cause actual results to differ materially from what the authors presently anticipate. This material is intended to be of general interest only and should not be construed as individual investment advice or a recommendation or solicitation to buy, sell or hold any security or to adopt any investment strategy. The views expressed may change without notice. All investments involve risk, including the potential loss of principal.