Emerging markets have had a weak YTD, with the MSCI EM Index being down some 7.5% TR, and for good reason.

Risk of ‘trade wars’ and potentially weaker trade and commodity demand/prices is one. Weak governance and the rise the ‘the rule of man and a decline in the rule of law’, as Russell Napier refers to in his Solid Ground piece of 31/08, is another.

We are seeing the impact of this in economies such as Venezuela, Argentina, Brazil, Turkey and now very clearly in South Africa. A mix of populism, high levels of government debt, the undermining of legal title over private assets, and weak governance, are being reflected in weaker stock prices, and confidence, across the emerging markets.

If not contained it could lead to an all-out rout, the impact of which will be felt globally, particularly by the banking segment.

Turkey for example has 400bn of external debt, largely denominated in USD. A default would hurt EU banks, so the IMF may need to step in to contain the impact.

With private investors being increasingly bailed-in though, the flight to safety of private and international capital is likely to be that bit more expedited, relative to history.

South Africa is a great case in point of how the rise in populism is leading to a complete contempt for property rights.

The country’s current President and leading party, the ANC, have declared their support to change the constitution to allow for the expropriation of land without compensation.

This is obviously a very hot topic in South Africa and receives a significant amount of coverage, at least locally, and opinion from both those in favor and against the change. What most may not be aware of though, is that SA has been working on land redistribution for many years, since the end of apartheid almost 25 years ago. There has been a program of willing seller, willing buyer.

The current plan of the government though, is to seize privately held land and redistribute it to relevant black communities, which are in the State’s opinion, the rightful owners based on historical records of land ownership. It’s being based very much on race, with black owned and Zulu lands being exempted.

For anybody that has any knowledge of South Africa’s past, making this a ‘fair’ redistribution would be an impossible task, no different from the American Indians or aborigines in Australia claiming ownership of all land before the settlers arrived.

Hundreds of years of record keeping and the protection of property rights could be thrown out and replaced with a property redistribution board run by the government – hardly something that would fly in the USA or Australia. And yet, in the case of South Africa, the government and many foreign powers, think it’s the right way to go.

The ANC argues that land redistribution will drive economic growth and employment. This is based though, on completely flawed assumptions.

Land is, in itself, worth little. It is the hard work, sweat and tears, and skill that drives value from the land and increases its value. Land needs to be worked, as I think any farmer would attest.

A quick look Zimbabwe highlights how well this policy is likely to work out. Land was taken from productive farmers and redistributed to black Zimbabweans. These were usually related to, or friends of, the ruling party.

As a result, Zimbabwe suffered massive unemployment and went very quickly from being the bread basket of Africa to one that needed food imports to feed the starving.  Its currency imploded. One needs to question how giving land to an individual that has no experience in farming will engender greater productivity.

Yet seemingly, some in the UK government and IMF see its benefits. Anybody, who opposes land reform in SA is often deemed ‘racist’. Again, this is unfounded nonsense, as it was the poor, largely black community in Zimbabwe, that suffered the most in their ill-founded land reform.

A rational mind would look through all the rhetoric and see this for what it is, the laying of the foundations of a potential land grab of massive proportions.

It’s also all about votes. One must laugh though, when listening to Ramaphosa explain that ‘our people want the constitution to be more explicit about expropriation of land without compensation’. If any other head of state was stupid enough to table the same question to the general voting populous, no doubt most would vote in favor.

The immediate potential impact of the ANC’s statements have already negatively impacted the Rand (ZAR) and foreign investment (FI) in the country. 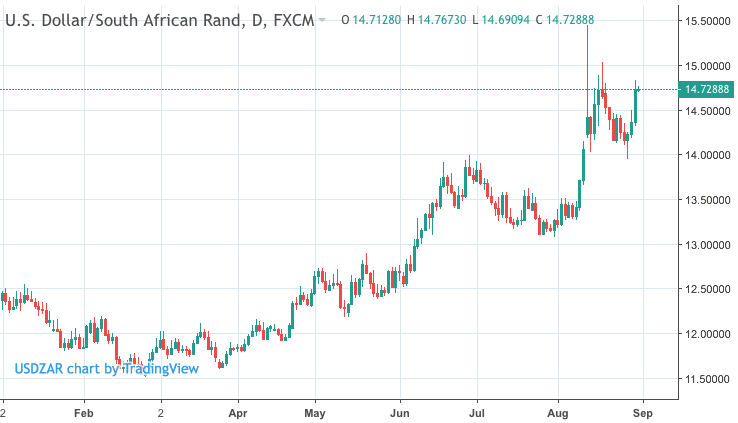 It goes without saying that, if the constitution is changed and reform continues as planned, both the ZAR and FI will suffer further. Investment will dry up, bank stocks will suffer and the currency will weaken, potentially exponentially.

Maintaining investor confidence is key and so far, I haven’t seen much cognizance of this amongst the politicians. It will likely be a controlled slow process of decline, unless of course the current ideology is reversed.

That’s increasingly unlikely though, if Melama continues to gain popularity. He loves stimulating controversy and getting the populous dancing to his tune of ‘kill the boer, kill the white man’.

Difficult to contain unless there strong government action and this won’t happen while the ANC is chasing votes and Malema is allowed to run amok.

As if ‘land reform’ was not enough, the SA government has also floated the idea of nationalizing the Central bank. David Maynier, a member of the DA (the opposition party in SA), summed up the risk well:

It’s a shame, but even 24 years after apartheid, the country may unfortunately still need to go through a cleansing and more longer lasting reconciliation process. Only then perhaps will the various races of the country work side by side for the common good and with the respect that each deserves, on the basis of contribution rather than color.

Turkey and Erdogan’s policy of locking up any opposition and ensuring absolute authority, is another great case in point of how not to engender investor confidence.

Turkey and Argentina are rushing into a full-on debt crisis. Brazil seems to want to join the party. Some things never change.

The Turkey market is down some 55% YTD in USD terms.

Why is this relevant? – well turkey has some USD400bn in external debt, largely USD denominated. This represents c.52% of GDP. The weaker Lira has put pressure on the country’s ability to service the debt. 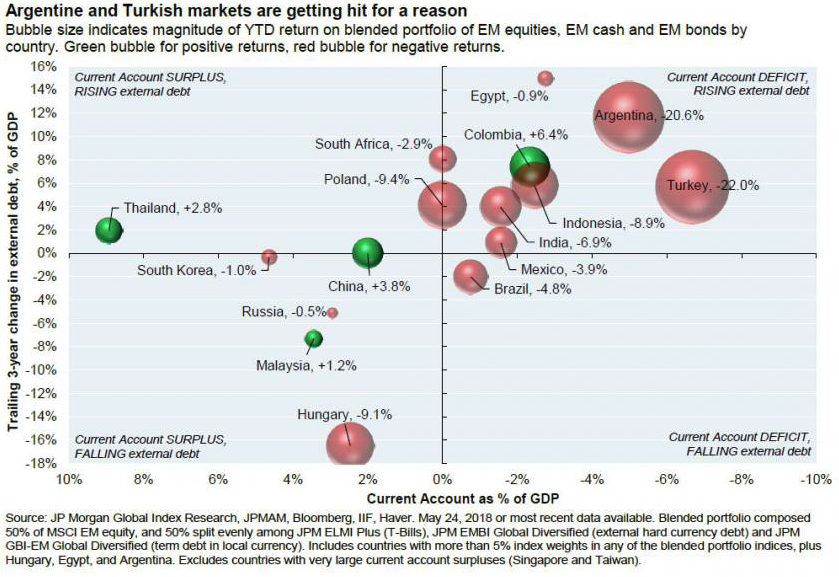 As we have seen before, unless steps are taken very quickly, this will lead to an eventual default or necessitated IMF bailout.

Turkey has taken steps to raise interest rates to try and stem the Lira’s collapse but as we have often seen in the past, this can pause the sell-off, but is usually not sufficient to reverse it.

As highlighted in prior articles, it’s often largely about confidence and Turkey and Erdogan may have lost what credibility they had.  In the case of Argentina, it’s more of the same.

Within the Emerging markets, we worry less about China. We expected that the RMB may weaken and provide a deflationary ‘offset’ to the increasing wage inflation we are starting to see in the US. This probably has a little further to go.

China’s government has though, an enormous task ahead to de-risk the financial sector and is constantly balancing the inflow/growth of credit with speculation in the housing market. Pull the former to fast and the real estate sector can implode.

The debt problems though are in the state owned enterprises and will no doubt be rolled over to mitigate any contagion. Chinese focussed technology stocks have come under pressure and we are researching the space for opportunity. JD for example is down some 30% YTD.

For the moment, we continue to prefer developed market equities, particularly the US and Asia. We expect to see further USD strength, especially if there is a blowout of risk across the emerging markets.

We are keeping our bond duration short on the expectation that rates will continue to rise gradually, with the Fed being behind the curve. Inflation is already at Fed target levels but is likely to rise further, though a stronger currency will mitigate the increase in wage pressure.

Gold has been unloved for the last quarter or so and may fall further with continued USD strength. As a non-fiat currency, we still consider it an essential element in a well-balanced portfolio. Speculative sentiment in gold is, though, at lows so there may be a short-term rally later this year.

This material is mean for accredited clients only. Nothing in this document should be perceived in any way as a recommendation or solicitation to buy or sell any security or fund. The securities highlighted have been selected to illustrate MW Capital Management Pte Ltd investment approach and are not intended to indicate how any MW Capital Management Pte Ltd fund or account has performed or will perform in the future. The securities discussed herein in do not represent any entire portfolio or account managed or advised by MW Capital Management Pte Ltd and may not be suitable for all or any readers. Any views, forward looking statements, projections and current investments are based on assumptions and judgements. Because of the significant uncertainty inherent in any assumption and judgements we make, you should place no reliance on such forward-looking statements or views – they may not prove to be accurate and actual results may differ materially.  Furthermore, they will change over time and should not be relied on in any way. There is no obligation for MW Capital Management Pte Ltd, and the company expressly disclaims any obligation, to update or alter the statements, predictions or any other information contained herein. This material is intended to be of general interest only and should not be construed as individual investment advice or a recommendation or solicitation to adopt any investment strategy. The views expressed may change without notice. Certain economic and market information contained herein has been obtained from published sources prepared by others. MW Capital Management Pte Ltd assumes no responsibility for the accuracy of such information. All investments involve risk, including the potential loss of principal.