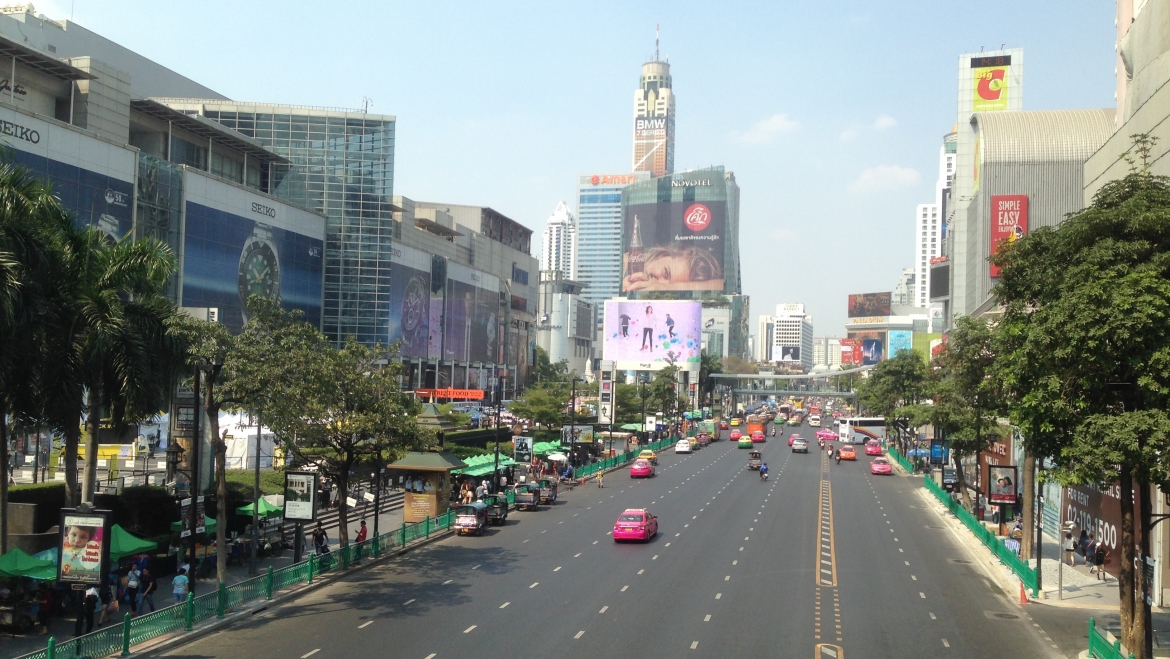 The Land of Smiles

The color is slowly coming back to Bangkok.

After the widely beloved King Bhumibol Adulyadej’s demise in October 2016, Thailand went into a period of mourning and life seemed to be standing still. Shops replaced their usual array of colorful T-shirts, scarfs and dresses with only black and white clothes. Roaming the streets of Bangkok now, the pulse of the vibrant city is back. Although the official mourning period will last for one year, daily life appears to have returned to normal and so has business.

The severe impact on the economy that was feared by many did not come to pass. Although the annualized growth in the fourth quarter was with 3 per cent the lowest in a year; consumer spending, which plunged in October and November, already bounced back in December. The economy expanded 3.2 per cent in 2016 which is below the Junta’s target of 3.7 but still above the 2.9 per cent in 2015.

The passing of King Bhumibol and the ensuing mourning period, including a 30 day ban on entertainment, was not the only matter weighing down on Thailand’s economy in the fourth quarter. A government crackdown on so called ‘zero-dollar’ tours from Chinese operators negatively impacted tourist arrivals from China.

In 2015, Chinese tourists accounted for 7.9 million, more than a quarter of all international arrivals. That number was expected to reach 10 million in 2016, until complaints by local businesses and tour operators highlighted that they were not getting a piece of the pie. By controlling the entire supply chain, from bus and boat operators to shops and restaurants, the Chinese held companies managed to capture every dollar that their customers spent in Thailand to the detriment of the local tourism industry. Apparently Chinese tour operators were offering tour groups to Thailand almost for free.

The Thai government thus imposed arrival fees and daily fees for Chinese tour groups as part of the crackdown, following which tourist arrivals from China plunged steeply resulting in a 16 per cent drop for the fourth quarter compared to the year before. The final number of Chinese tourist arrivals in 2016 had to be adjusted down to only 8.7 million.

During my recent trip to Bangkok, I visited King Power’s Downtown Complex to get a feel for the current situation surrounding Chinese tour groups. The self-proclaimed King of Duty Free that “has been appointed by the Airports of Thailand to be the sole Duty Free retailer through a concession received for all main airports in the country” (King Power Website) has been impacted as well by the drop of arrivals from China. However, talking to sales staff at various shops it turns out that the mood is upbeat. Chinese tourists are slowly coming back after the government reduced visa fees. And for now at least, it seems that the strategy of attracting more so called FITs, free and independent travelers, that prefer a more individual traveling style, is working out.

To increase revenue per tourist the Tourism Authority of Thailand (TAT) started several initiatives to draw more FITs to its shores. Niche travelers are targeted by specific campaigns even to the extent of asking the navy to grant tourists access to warships and training camps.

Tourism remains a main pillar in the economy, according to Thailand’s Tourism and Sports Ministry. It contributed 17.7 per cent of its GDP in 2016. For this year, revenues are expected to hit THB 2.71 trillion (~USD 77.1 billion), an 8.2 per cent increase to 2016. Thailand’s Finance Ministry estimates a 3.6 per cent GDP growth for 2017 helped by thriving tourism as well as several infrastructure projects that are in the pipeline.

To hit their target of 34.5 million visitors, TAT has signed a one-million-dollar deal with Etihad Airways to promote Thailand as a top tourist destination. With Singapore Airlines, a memorandum of understanding has also been signed to draw more tourists from key markets like Singapore, South Africa and Australia.

The next leg of my trip brought me to Phuket. Phuket was less impacted by the crackdown on zero-dollar tours and instead experienced a resurgence of tourism from Russia. International arrivals from Russia into Phuket were up by 51% in 2016. The total number of travelers from Russia to Thailand was only up by 23% which shows a clear preference of Russian travelers for Phuket.

Of note is that, according to C9 Hotelworks, a hospitality consulting firm, hotel occupancy in Phuket rose by 6.28 per cent to over 76 per cent with an average daily rate of above THB 3,800 in 2016. More than 30 hotel projects are in the pipeline until 2020, some of them open for investors.

I took a walk through Jungceylon Shopping Complex in the center of Patong Beach. Shops, restaurants and bars cover an area of 200,000 square meters and the place is bustling with tourists. Between ice-cream stands and souvenir shops a couple of property agents and developers have set up their stalls to promote their latest projects.

Although the hospitality business in Phuket seems promising, one must be careful when picking a project. A thorough due diligence is necessary to ensure that developers and agents can deliver what they promise. Some of the questions to be asked are: Who is the developer and which past projects did they deliver? Is the pricing for the project competitive? Is it in a promising location? Who will manage the project after completion?

Probing agents at some of those stalls with above questions led me to believe that besides the sales talk to promote their projects, the motivation and optimism for tourism in the region appears to be genuine.

After spending two weeks in the land of smiles it seems the country, government and its people alike, are hopeful for the future.